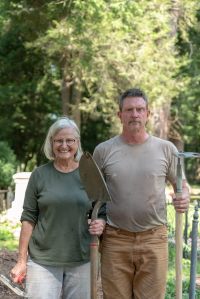 Dramatic improvements are underway at Clarkesville’s historic downtown cemetery where a newly-formed nonprofit is working to restore and preserve the nearly 200-year-old community landmark.

Late last year the City of Clarkesville supported the formation of Historic Clarkesville Cemetery Preservation, Inc., a non-profit corporation operating under the laws of the State of Georgia. The organization’s board of directors is led by Clarkesville Mayor Barrie Aycock, who has made restoration of this city landmark a priority.

“This is our history,” Aycock said. “It’s our town’s legacy. Herein are the stories of those who helped make Clarkesville and Habersham County what it is today.”

The cemetery has been awarded $15,000 in grant funding through two separate grants from the  State of Georgia Tourism Development and the Department of Natural Resources Archeology Program. The initial grant was used to fund a comprehensive master plan of the property. The plan identifies all of the known grave sites and makes recommendations for restoration and preservation of the property. The remaining $5,000 is being used to fund restoration efforts which have begun this summer.

The physical appearance of this sacred ground is already seeing improvements with several individuals investing significant volunteer hours to enhance the property, including restoring some of the burial sites and landscaping. 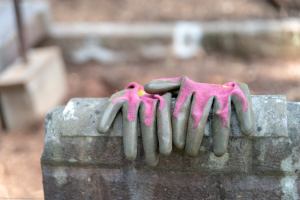 Experienced landscape architect Brooks Garcia is on a mission to restore and replenish historically-accurate plantings that would have been common during the era of the cemetery’s establishment and subsequent decades of burials. Garcia, a new Habersham County resident, is the former gardener at Historic Oakland Cemetery in Atlanta.

“It is history written in stone,” Garcia said.

Polly Earle of Clarkesville has been working with Garcia to restore some of the graves. Earle is passionate about historic preservation, having been part of other historic cemetery restoration projects in Northeast Georgia, including one in Carnesville.

“That’s her passion,” said Leigh Johnston, Earle’s daughter and former Clarkesville council member. “It’s a place of comfort and peace for her.”

Aycock said fundraising to sustain the cemetery is woven into the organization’s mission. Community support will be critical for the work to continue, she said. Aycock invites interested individuals to visit the new website and social media platforms for more information on how to contribute and to follow the progress.

“A fundraising event is being planned for October – look for details very soon,” Aycock said. “Volunteers are also needed to help with the physical labor involved in clean-up and ongoing maintenance of the property.”

“This project is important to our city to connect us with our past,” she said. “All of our residents should know about the families who settled this area and grew our town to become the city it is today. Wouldn’t you feel good knowing you had a part in preserving it?”

Located on land donated by Colonel James Brannon in 1831, the old Methodist Church was built in the center of the present cemetery and remained there until 1881. The cemetery contains the graves of historically important individuals including Jarvis Van Buren and his wife, Eliza. Mr. Van Buren, a cousin of President Martin Van Buren, relocated to Clarkesville from New York to take charge of the Iron Works. Other prominent persons buried here are Erwin Griggs, a long-time clerk of the Superior Court of Habersham County; Mr. Andrew Gailey, a carpenter who made most of the coffins in which the citizens of Clarkesville were buried; Richard Habersham, a U.S. Congressman and nephew of Revolutionary War hero Col. Joseph Habersham; Matthew Rhodes and Mr. R.D. McCroskey, both Revolutionary War soldiers; Judge Cicero H. Sutton, Habersham County’s first ordinary.